9 Technology Trends That Will Shape the Rest of 2019 In my practice as an Interim CIO and independent technology advisor, I have a front-row seat to today’s most influential technologies. Here are nine of the trends that I foresee having the biggest impact on business for the rest of 2019—and how soon they’ll be able to deliver on all their promises.

These days, it feels like everyone is talking about the transformative power of AI. But the technology is not new—it’s just becoming much more powerful thanks to advances in computing and an explosion of training data.

At the same time, many traditional approaches are being re-branded as AI or ML. About 90% of the AI technologies that I review as a start-up investor and advisor to big companies turn out to not use any real AI.

In the business world, there’ve been a few high-profiles failures like IBM’s Watson along with some success stories, like Google’s Vision.

The main challenges for companies that are trying to harness ML and AI lies usually not in programming, but in securing very large, high-quality data sets to use to train the algorithms. It’s a big, crowded space, with thousands of small players trying to be successful, not to mention all the big tech firms.

Companies to watch: Innovative small firms as well as big players like Microsoft and Google that maintain the dominant underlying “enabling” development platforms. Though Blockchain is often confused with Bitcoin, the technology has moved well beyond cryptocurrencies, with applications for transactions, contracts, insurance, supply chain, and even music.

So despite the perceived hit Blockchain has taken recently due to the Crypto market’s 2018 pullback, it continues to enjoy many successes in the business world. In fact, I have helped implement three successful blockchain projects for large companies that are in use today and showing benefits and positive ROI. These were all solutions to improve supply chains solutions using Hyperledger Fabric or Ethereum for the Blockchain protocol.

Over the last year, market hype has slowed somewhat, but the reality of Blockchain applications is closer than ever. DApps—open source, decentralized applications that are stored and executed on Blockchains—have seen some success at the consumer level. If you’ve read about or even played the game Cryptokitties, you’ve interacted with a DApp. Other popular DApps include gambling platforms and freelance job boards.

Blockchain tech is quickly becoming a popular “technology platform” to develop solutions on top of and should be in consideration for any database or applications solutions that are being planned. It is also becoming easier to build blockchain applications—for example, JPMorgan Chase and Microsoft recently announced a partnership to build a platform called Quorum that makes it easier for companies to use JPM’s enterprise blockchain and Microsoft’s cloud computing software.

Robotic Process Automation, or RPA, enables businesses to automate mundane tasks like processing insurance claims, freeing workers to focus on higher-value work. The idea is not new, but thanks to advances in technology and excitement around the idea of using AI to enhance capabilities, it’s recently been re-branded as a separate category.

Most of the popular RPA products are derived from the automated application testing products of the past. The space is currently dominated by 3 RPA vendors: Blue Prism, UIPath, and Automation Anywhere.

In my experience, it’s still fairly difficult to implement RPA. Most off-the-shelf RPA products give you a good base to start with, but almost always require substantial customization and development. What’s more, they don’t often eliminate the need for manual process intervention—just reduce it. Still, most implementations show some net benefit in the end.

There are some good and cost-effective use cases for using RPA, especially on tasks that don’t require much human-to-human interaction and have high daily transaction volumes.

Companies to watch: The companies that have built the dominant technology platforms for developing RPA, like Blue Prism, UI Path, and Automation Anywhere.

Concerns about data privacy have finally come to the US. Many other countries already have far stricter regulations in place, but they aren’t often enforced.

In the coming months, we will start to see more regulation and enforcement. (Despite what they may say publicly, many of the larger tech companies prefer more regulation—provided they can shape it to their benefit.) The costs to companies of complying with these regulations will also grow.

At the same time, consumers are starting to become immune to the constant announcements on privacy violations and data breaches. If no significant breaches or revelations occur in the near future, the topic will quickly fade to the background as a public concern.

Companies to watch: Popular B2C tech companies that don’t rely on end-user data as a source of revenue.

Virtual Experience, or VX technologies—including Virtual Reality (VR), Augmented Reality (AR), and Mixed Reality (MR)—are here to stay, and we are about to see new hardware that gets us closer to the original promise of changing the way humans interact with the environment and each other.

As hardware costs continue to decline, adoption will increase, and VX will start to be integrated into portable, everyday devices like cell phones.

AR, in which people’s view of real-world environments is augmented with superimposed computer-generated images, will dominate the space in both consumer and business applications. It’s already become standard practice for sports commentators to use AR as they discuss and analyze plays and physicians use AR to guide them during surgeries. Meanwhile, Google just announced that AR results will start showing up in search later in the year, enabling people to view, manipulate, and interact with 3D objects.

Companies to watch: The big players that make the Operating Systems for the VR/AR hardware, like Oculus and Microsoft.

5G networks offer faster speeds and more reliable connections than ever before. The technology is starting to see limited rollouts in 2019, but likely won’t see widespread adoption until late 2020.

Most of the attention on 5G has focused on the fact that it offers faster speeds on smartphones. But the less publicized promise of 5G is its ability to replace traditional broadband connections in homes and businesses around the world. Instead of maintaining on-site networks and WiFi, users will connect directly from their devices to a specific virtualized 5G network through one of the telcom providers. This eliminates the need for a user to ever connect through less secure channels, even when outside the walls of a business.

As you might imagine, this will have significant negative impacts to the market share of broadband cable and slower Tx line providers.

Companies to watch: Companies that will excel in providing 5G as a wireless broadband solution for businesses at low price points.

The rise of cloud computing has prompted many organizations to move all technology infrastructure “outside the walls” of the company.

Every CIO I know is trying to bring this mantra to their own companies. In fact, some have already pulled the plug on all their data centers.

In the past, it was seen as safer to keep your data on-premise or in proprietary hosting centers. In the past few years, the opposite has become true. Moving outside the walls reduces liability and decreases costs. It’s a little-heralded but important trend.

Companies to watch: The dominant cloud players (Amazon, Microsoft, Google) along with any company that has a unique solution to get infrastructure outside the walls of a business.

Cybersecurity has claimed a growing percentage of today’s IT budgets. Some companies are building in-house teams, but outsourcing is a popular option.

Yet the nature of the work is changing. As corporate assets move to the cloud, cybersecurity now focuses more on understanding how applications interact and training end-users to detect and avoid phishing schemes—rather than administering internally hosted systems and maintaining server and database integrity.

Most of the recent work I’ve done for big companies has centered around this, too. It makes sense, given that humans are still the weakest link in the information security chain.

Companies to watch: Companies that focus on cybersecurity services or that have novel products that automatically adapt to different threats.

The Internet of Things (IoT) has been around for many years now. As the technology has matured, it is starting to seem commonplace—generic, even. From smart watches to smart speakers, there’s a good chance you interact with an IoT product many times each day.

Development costs have plummeted, too. I recently helped a client add IoT to an existing device for less than $1 USD per unit and a couple of weeks of application development. Increasingly, IoT will become a standard feature in many common devices, rather than a novelty item.

Autonomous Things, or AuT, are newer, incorporating AI into more complex devices like delivery drones and self-driving cars. They aren’t a full reality yet, but that’s only a matter of time.

Companies to watch: Companies that manufacture plug-and-play IoT/AuT chips as well as those that provide out-of-the-box IoT/AuT firmware.

What else is on the horizon?

Of course, those aren’t the only tech trends on the horizon for 2019. Here are a few additional ones I think will make an impact: Tech Talent You Can Count On

Put the latest tech trends to work for your business with the help of our independent technology experts. 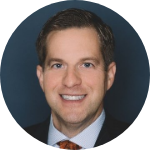 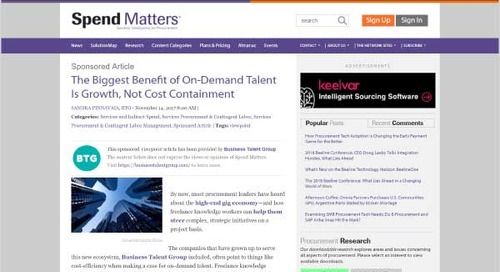 The Biggest Benefit of On-Demand Talent Is Growth, Not Cost Containment 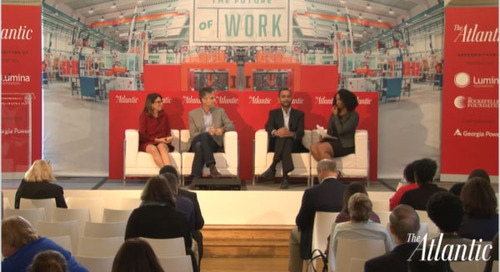 The Jobs of Tomorrow / The Future of Work

BTG CEO Jody Greenstone Miller speaks at The Atlantic’s Future of Work Summit on what companies and workers...

Get our free guide to working with independent consultants. 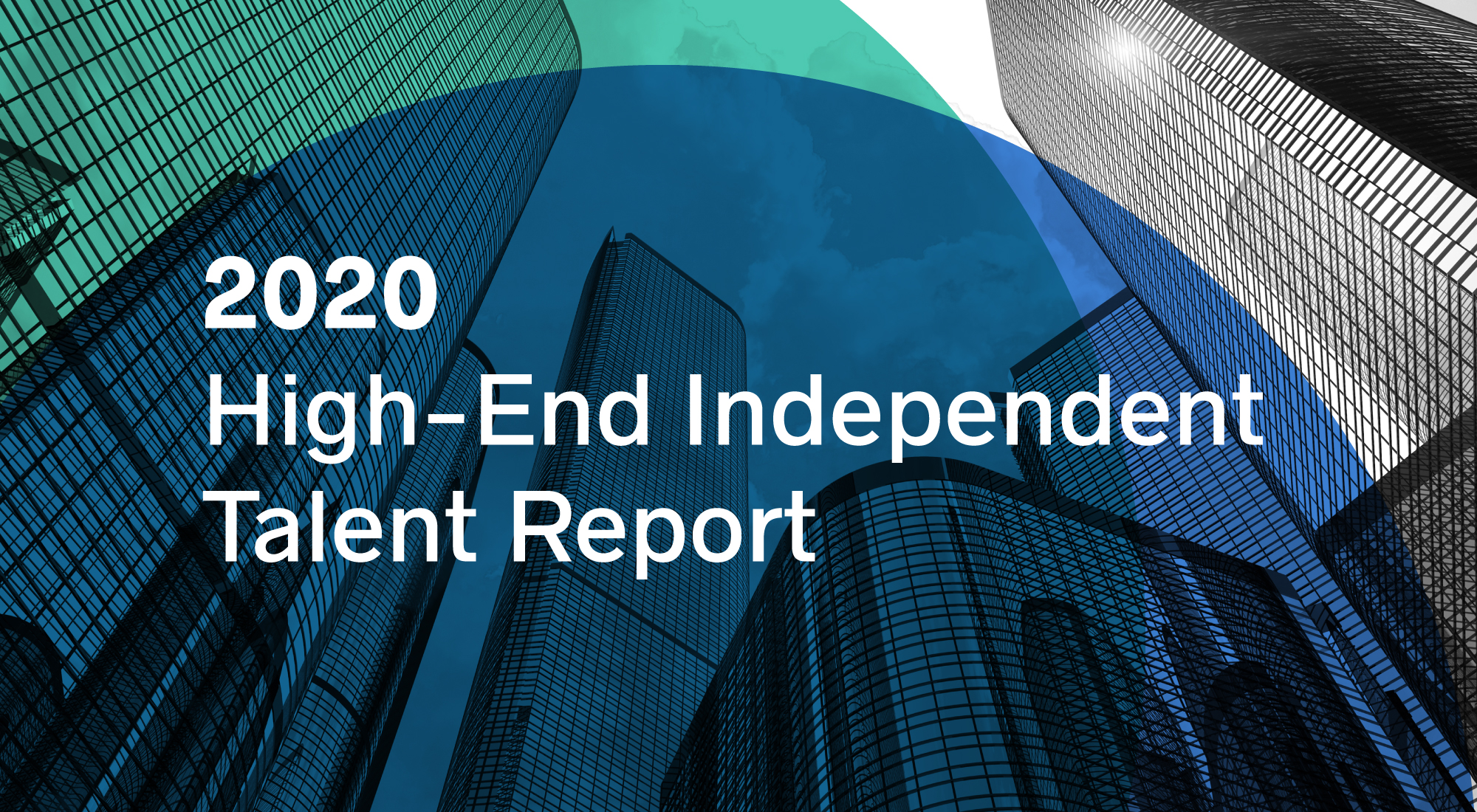 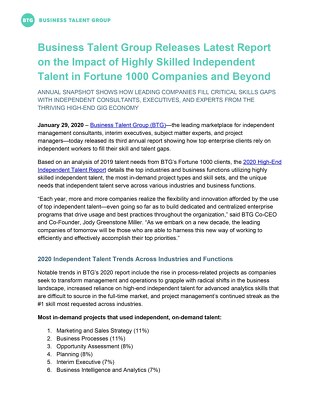 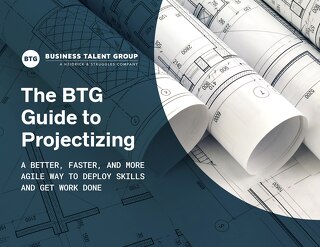 Markets evolve quickly. Not keeping up is not an option. Neither is stocking your team with a full suite of skills you need now or might need in the future. 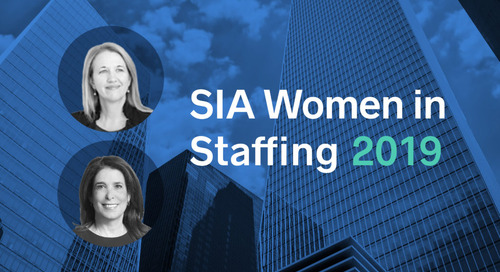 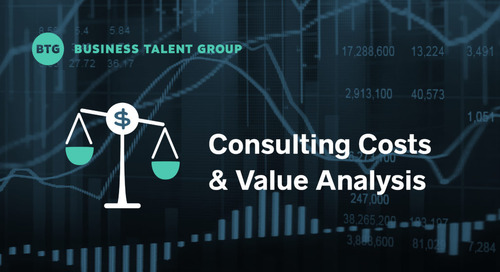 Using on-demand talent adds value to your biggest strategy and implementation projects while significantly cutting consulting costs. But just how much can you save by using independent consultants? 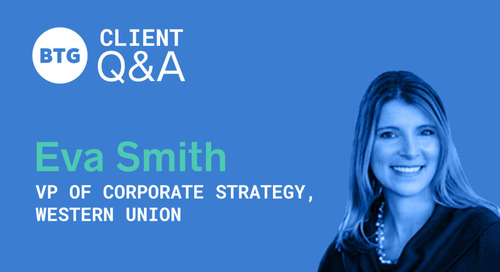 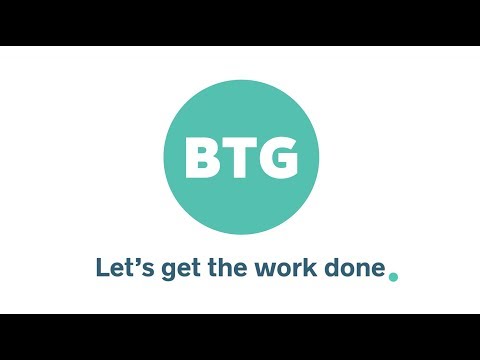 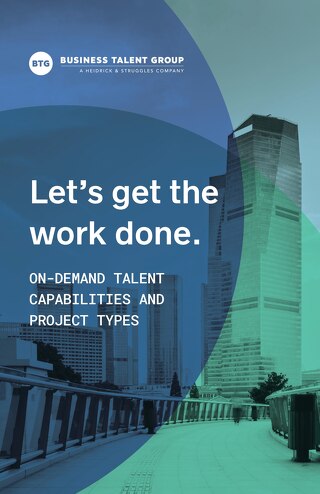 Check out our project capabilities to see how you can leverage BTG’s on-demand talent marketplace to tackle big initiatives, fill interim positions, and oversee transitions and transformations. 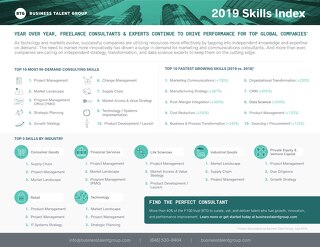 The BTG Skills Index ranks the most in-demand consulting skills, the top three by industry, and the fastest-growing. In 2019, project management holds at most requested, and marketing is on the rise. 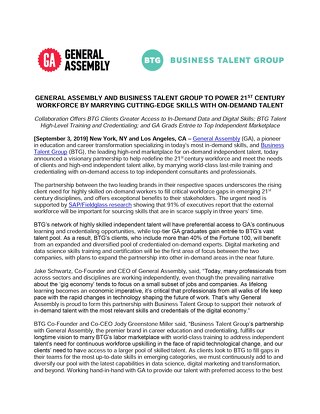 General Assembly and Business Talent Group are working together to meet client and talent needs by marrying world-class training and credentialing with on-demand access to top independent talent. 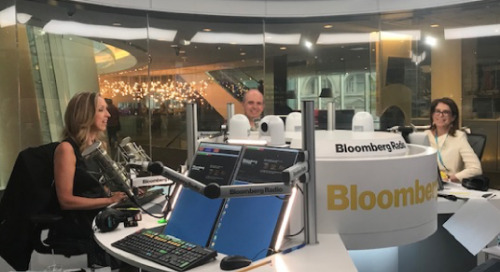 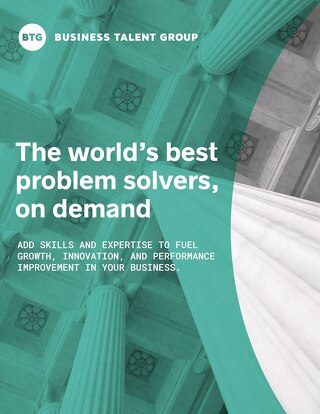 Let's get your most important work done. 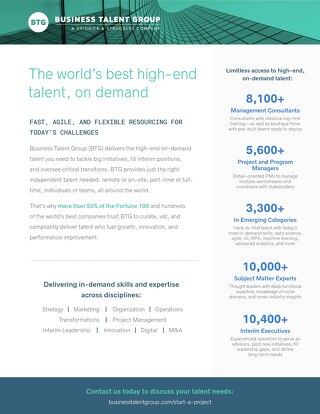 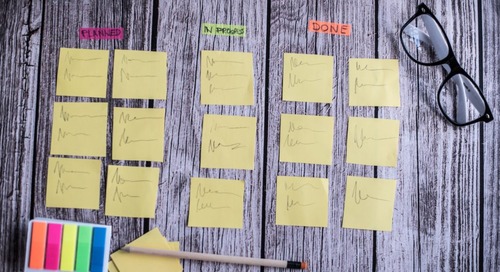 Why the Agile Organization is Bigger Than You Think

Many companies are thinking big about the agile workforce. But they aren't thinking big enough. Learn best practices for building an agile organization. 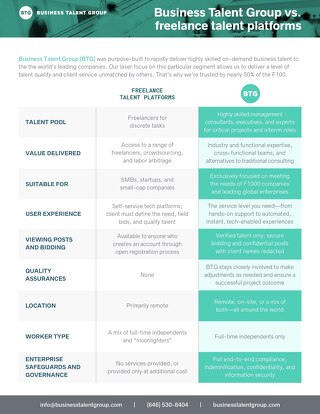 BTG vs Other Talent Platforms

Business Talent Group (BTG) was purpose-built to rapidly deliver highly skilled on-demand business talent to the world’s leading companies. Our laser focus on this particular segment allows us to deli 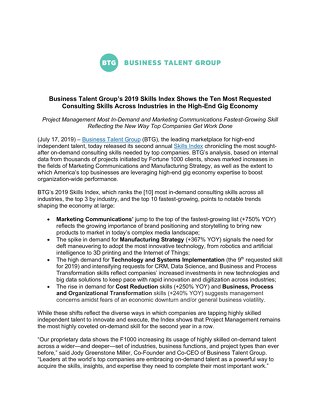 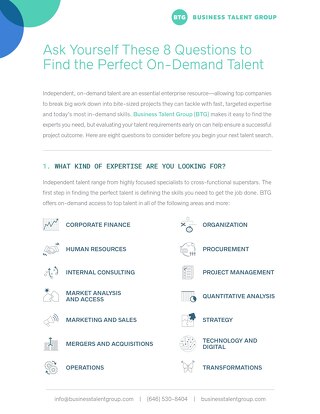 8 Questions to Help You Find the Perfect Talent

Evaluating your talent requirements early on can help ensure a successful project outcome. Here are eight questions to consider before you begin your next talent search. 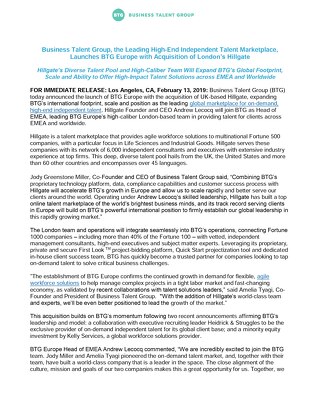 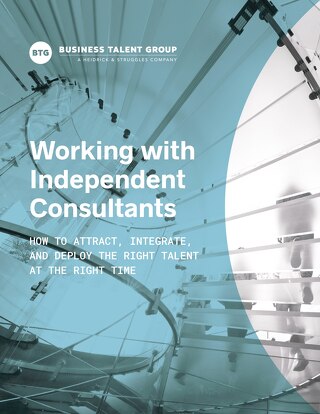 Guide to Working with Independent Consultants

Meet your agile workforce. It’s no secret that your company’s ability to capture new opportunities depends on the resources that are available to go after them. 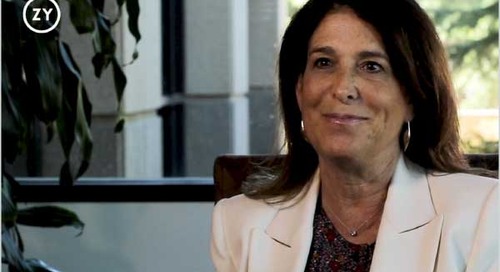 Are High-Skilled Workers the Future of the Gig Economy?

BTG CEO Jody Greenstone Miller on why high-skilled workers are the future of the gig economy.